While we are primarily a hoops-focused performance site, there are times when various training or running shoes pique our interest enough to provide a more detailed examination of these different types of footwear (check out our pieces on the Nike Zoom Revis and Reebok ATV 19+). The adidas Springblade just happened to be one of these shoes that really caught my attention with its tech and performance specs. 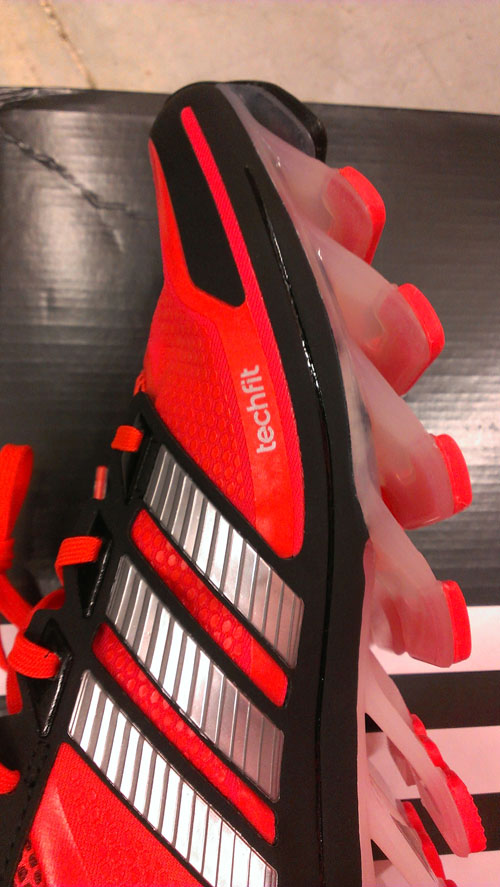 Putting the shoes on for the first time and taking a few steps reinforced a couple of things. There are blades. And they are springy.

adidas says the 16 blades are made of a “high-tech polymer” and they slant backwards with durable adiWear pieces on the bottom of the blades to give it a surface to hit flush with the ground – something that doesn’t look possible given the shape of the blades from a side profile point of view. 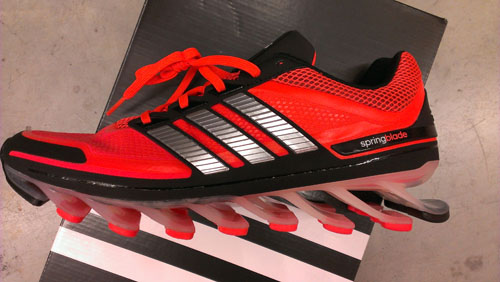 I was surprised to see the blades in person because it’s such an aggressive design, and one that doesn’t look like it should work, but somehow does. Most cushioning platforms, even ones such as Reebok’s ZigTech, do not allow their sections to function independently. In the case of ZigTech, the columns are still attached to one another underfoot (same with Nike’s Shox, etc). Even with Nike Free and Reebok Realflex, there’s still an element of the individual sections being closely attached to the midsole platform.

The blades of this shoe are still attached to the midsole, obviously, but they’re only attached there and not at the bottom of the individual TPU pieces. This gives the shoe an exceptional amount of independent flex and bounce as each blade contacts the ground through the footstrike. Imagine the Crazyquick’s transition, but on stilts and with more responsiveness. In fact, one can draw a connection between the Crazyquick and Springblade designs in terms of the flow from heel to toe. 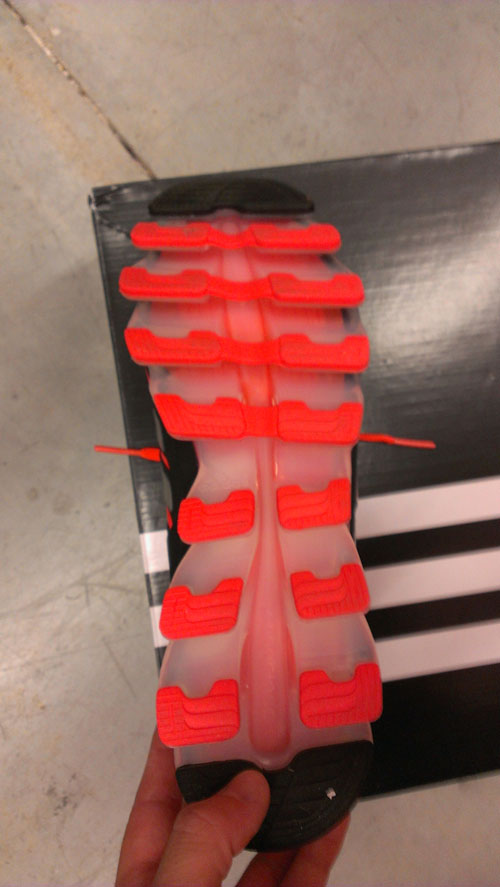 The 16 blades do impact the ground independently as you walk, and the response from the blades is noticeable and very bouncy. There’s not a lot of ground feel, and these definitely wouldn’t be suitable for cross training or any kind of lateral movements. But the fact that you can’t feel the ground once you put them on is actually pretty nice if you’re just wearing them around or running.

The Techfit upper is glove-like, and I continue to be impressed with the application of that technology in adidas footwear (loved it in the Crazyquick too). The shoe is relatively heavy though (over 12 ounces in the sample size) and I sort of wish there was a more substantial or strong upper to lock my foot into the heavier chassis underfoot. 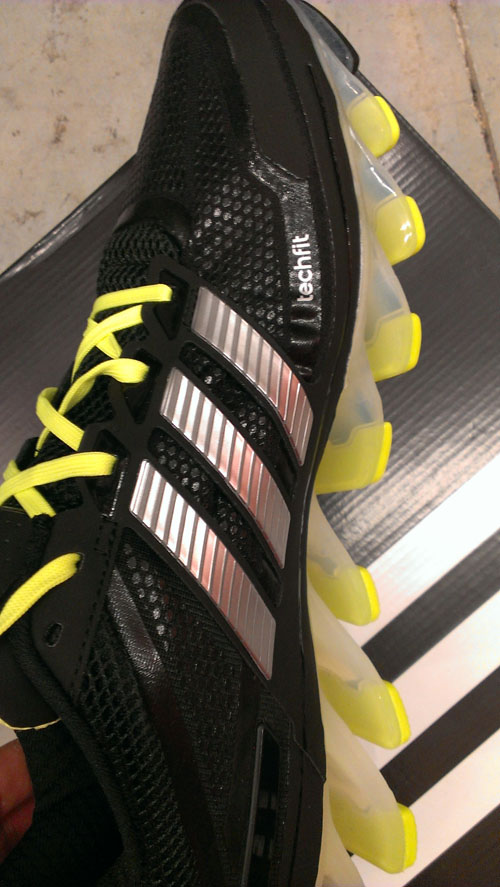 The other aspect to the Springblade is its place within the adidas footwear profile. As this excellent Forbes piece explains, adidas is putting a lot of its eggs into the Springblade (and Energy Boost) basket. After trying them on, it made sense that the shoe would be geared towards entry level runners – I don’t think hardcore runners desire this type of cushioning and energy return at the expense of a lack of road feel and technical running aspects. 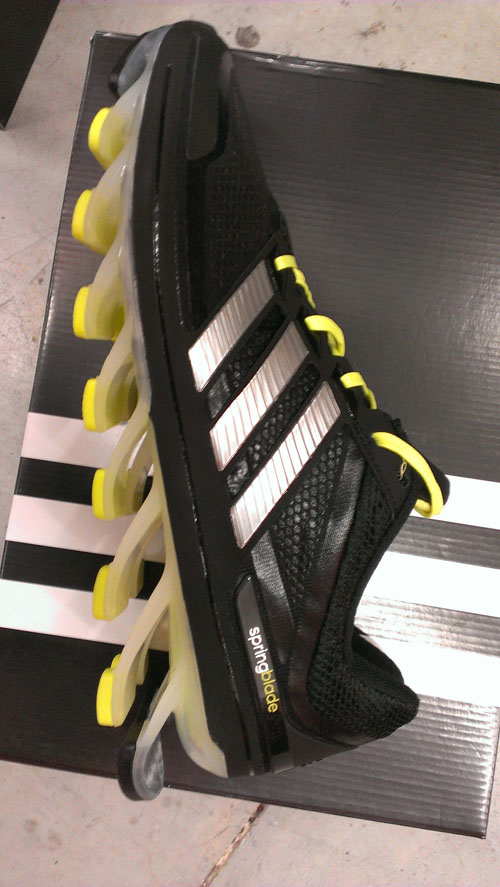 But it does raise the question then, at $180, who exactly is it geared towards? adidas claims the high school athlete as its target consumer for the Springblade, but the price point is incredibly high for a shoe designed for kids who will be asking their parents for this kind of money. And even then, the highest level high school athletes are getting into incredibly demanding and taxing training programs that probably require more specific training footwear. I understand that it can be used for training runs, but at its weight and build I’m not sure what distance or type of runs it’s best for. I just think that there are more practical options at a better price point.

While that may seem like a depressing paragraph, I have to admit that I did love this shoe on foot. As someone who works retail, slipping those on after being on my feet for 7+ consecutive hours was like a dream. I felt very little impact on my feet or up through my knees and back, so this is a shoe I would love to wear if I’m going to be on my feet all day (but it still wouldn’t be my first choice if I were going on a run). I realize that the technology was years in the making and it carries an expensive marketing campaign with it, but I worry that the $180 price tag is going to be tough to swallow for adidas’ target consumer. 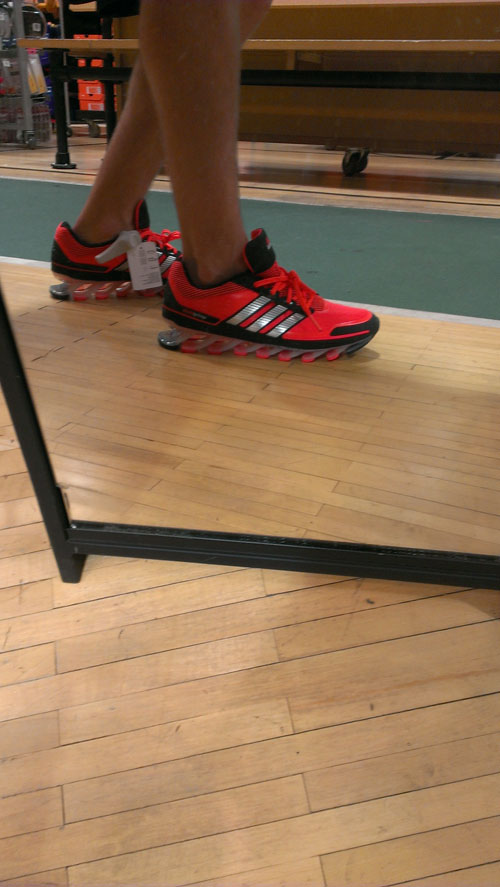 Despite the fact that I struggled to really pinpoint a great purpose for this shoe and the Springblade technology, its a shoe that I look forward to buying simply because it’s so comfortable and because I want to really get a feel for the tech. It’ll be very interesting to see how this shoe performs at retail once it drops on August 1. I wholeheartedly recommend at least trying it on at your local retailer. It won’t feel like anything you’ve ever put on.