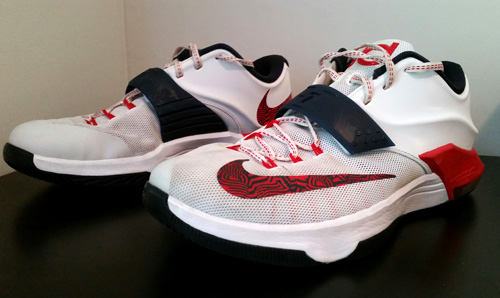 The Nike Basketball division has had an interesting year to say the least. From a performance standpoint, it’s been awhile since I have reviewed a Nike product that I truly loved playing in. The shoes I’ve recently tested from the brand have all had a pretty significant flaw in my eyes. In the Kobe IX for example, there’s a total lack of midfoot support/cushioning and for me, it made the shoe unwearable after a few games. The LeBron XI never quite fit or flexed naturally for me. Neither of the KD models fit me well and the Elite version had a serious fit/stability issue. Even from other brands, I struggled to really find a shoe I liked playing in outside of adidas’ Rose 4.5.

With all these reviews in the rearview mirror, I was anticipating a fresh start in the KD7. There is plenty of tech to be found, including a 180° Zoom bag, Hyperposite heel/collar, midfoot strap, and Dynamic Flywire support. Thankfully, the shoe delivers and is one of the top performers I’ve hooped in this year.

Fit
The KD7 features a hybrid construction, with a mesh forefoot forefoot and midfoot construction combined with a Hyperposite heel. I had some initial doubts before as to how well the two very different materials would blend, but I found the fit to be very good. I hope this mesh construction is something Nike uses more of going forward, because it plays so much more naturally than Fuse does. The flexibility it allows is awesome, and using mesh allows lets the Flywire cables – which are actually utilized – to cinch the foot down. Whereas a thicker, stiffer Fuse setup limits the amount of support you get from Flywire, this mesh build helps the cables pull as tight as possible.

There’s ample room in the toebox, and even though an 11 is typically a little short for me, there’s just enough volume in the toebox that it fits perfectly without constricting the toes. The mesh build helps here again, giving you plenty of flexibility in a key area. Forefoot lockdown is very good – you can lace the KD7 up extremely tight – and the midfoot strap is actually useful for midfoot lockdown. You might notice some pressure on the top of your foot due to the strap and the stitching of Hyperposite piece, but that’s mostly alleviated after the first few wearings.

I noticed very slight slippage in the heel fit upon the first few wearings, but I’d chalk that up to the Hyperposite getting broken in. It’s a stiffer material, but it holds its shape and will mold to your foot somewhat after you get them broken in. Overall, the fit was excellent in the KD7, particularly in the forefoot area. It’s the first and most important box to check, and the Swoosh nailed it with this one. 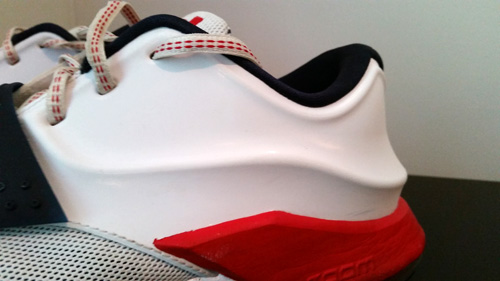 Heel-Toe Transition
The KD7 is very smooth from heel strike to toe off, with a full length Zoom unit, stable midsole and flexible outsole. I almost felt like the shoe promoted more of a midfoot strike – not to the extent of the KD III, which felt like it had a bulge under your arch that rolled you forward – but I noticed myself not landing quite as squarely on my heel. A midfoot strike is a very neutral and natural gait (it’s what many competitive runners strive for), so this is a good thing.

Cushioning
As mentioned before, the shoe features a 180° Zoom bag, visible at the heel. The Zoom bag is housed in a solid midsole that provides plenty of support while still remaining flexible. The midfoot support from the KD7 is the best I’ve had since the Anatomix last year. While I may sound old harping on support, if you play enough ball you WILL need it eventually.

You’ll notice five TPU bars on the bottom of the shoe that run through the midfoot, mimicking the bones of your foot. This aids support while promoting natural flexibility, and is a fantastic addition to the cushioning setup. The UA Anatomix Spawn featured a TPU support structure with a similar idea in mind, and it was great in that shoe too. Hopefully, the extreme lightweight/flexible movement will get phased out of basketball models and we’ll get more attention to detail when it comes to midfoot support.

Responsiveness is excellent with a firm but bouncy Zoom setup. Stability is also very good, thanks to the supportive midsole and overall fit of the upper. The lateral stability is miles ahead of the KD VI Elite. As far as step in comfort, you’ll be hard pressed to find a better hoops shoe. The Jordan CP3.VII and XX8 SE both were extremely comfortable underfoot, and the KD7 is right there in terms of sheer comfort.

Overall, this may be my favorite cushioning setup of the year across all categories along with the XX8 SE. I loved the support and responsiveness especially, and it simply plays well in every aspect.

Traction
Featuring a pressure mapped outsole with a herringbone-esque pattern (more wavy, reminded me a little of the Jordan XX3 models), the traction is excellent. Flexibility is good and the channels are deep, which is a recipe for reliable traction underfoot. I’ve only used it indoors, a few times on very good floors and once on a dustier one, but traction was great no matter what.

Materials/Durability
No issues so far here. The Hyperposite heel will scuff some on the medial side, but that’s to be expected. I anticipate the mesh holding up well in the forefoot, given that it’s backed by another layer of fabric. There’s also a medial toecap for durability in the toebox. I was concerned at first about the Hyperposite being stitched directly to the mesh but its well constructed and after playing in it I don’t have any concerns there. 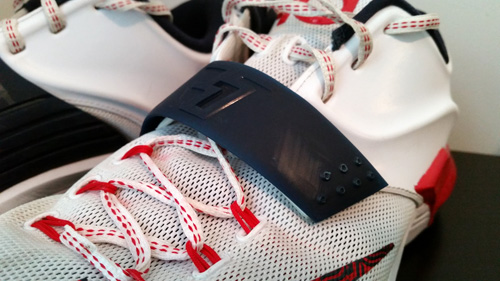 The KD7 proved to be one of the best shoes I’ve tested this year. It instantly becomes a go-to shoe for me thanks to the lockdown, support and responsiveness, along with great transition and traction. It’s simply a very good shoe overall, built to be a performance beast rather than just a unique silhouette like the KD 6. I was beginning to doubt Nike after being disappointed in the last few models I’d tested, but they got this one right.

As a final note, I think this is a great shoe for any position. There’s enough support for bigger guys, but the shoe plays very light and nimble thanks to the secure fit and good responsiveness. If you’re looking for a team shoe or something to last all season, definitely make it a priority to try on the KD7.