After a couple of unsuccessful attempts to cop the Kobe IX Elite, I managed to snag a pair of the Engineered Mesh-constructed Kobe IX EM Low. The low version not only dropped the height considerably and used Engineered Mesh rather than Flyknit, but also swapped out the carbon fiber pieces for solid rubber. The drop-in Lunarlon midsole remained the same. I picked up the “Bruce Lee” iteration which, in my opinion, is a gorgeous summer colorway whether you end up rocking these on court tonight. 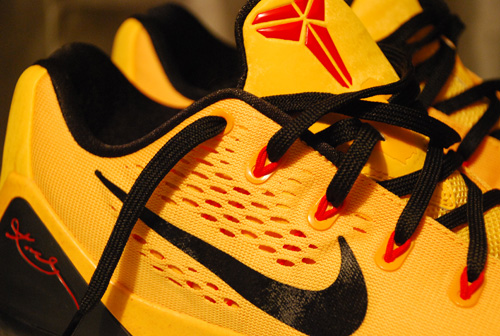 While I hadn’t hooped in a Kobe model extensively (besides the previously reviewed Venomenon 4) since the Kobe VI, which I bought two pairs of, I was pumped to see if the IX harkened back to the V and VI I loved so much. In my opinion, the VII was too clunky and the modular midsole/collar system was kind of a failure, and the VIII just didn’t have enough midsole for me. With that in mind, I laced up the IX and got to work.

The first thing you’ll notice is a ridiculously snug fit when you lace the IX up tight. It immediately reminded me of my personal experience in the V and VI, which fit so snug over the forefoot and midsole that it hurt your feet for the first couple wearings until the upper loosened up and broke in. The IX was very similar in that respect, providing complete lockdown from heel to toe. The outsole/midsole wraps up around the heel – an awesome design aspect that provides a ton of performance value. There was no slippage to speak of, even with a very narrow foot like I have.

Engineered Mesh is basically mesh with structure. In and of itself it provides solid lockdown without much give on cuts and changes of direction. You’ll notice it’s slightly thicker in the toebox before moving into more traditional-feeling mesh where you see the perforations or cut outs. It’s paired with Dynamic Flywire, which doesn’t necessarily add much to the support and fit in this case, but nonetheless it’s excellent overall. I would say that the IX is right there with the Kobe VI as the best fitting low top I’ve played in.

You’ll also probably be curious about the raised portions of the insole, designed to keep the foot from sliding on the footbed during play. It feels weird to the hand, but normal on foot and I didn’t have any slippage issues on the insole. 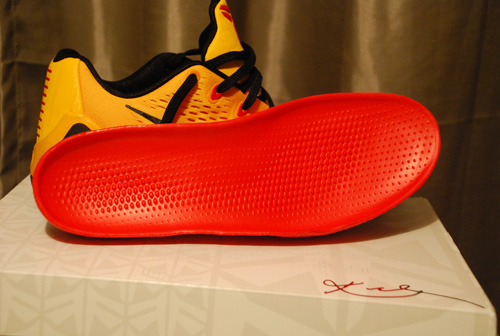 I did go with an 11, a half-size down from my true size of 11.5, but didn’t feel overly cramped in the toebox. Normal to wide footers may want to stick with their traditional size though, as the last of the shoe wraps in fairly tightly underneath the midfoot.

The Kobe IX was very smooth from heel strike to toe off. Aided by a pliable (but thick) Lunarlon midsole and the most flexible outsole rubber I’ve ever seen, the IX will allow you to move, plant and cut naturally and smoothly.

Now we’ve come to the crucial part of this review. On one hand the Lunarlon midsole is very comfortable, with a fairly plush feel upon first wearing. Some folks love Lunarlon, and I’ll admit that this iteration – in the drop-in format – was very comfortable on foot and I preferred it over some other Lunarlon-based cushioning systems. But given the drop-in midsole and an outsole that you can literally flex and press a thumb into with little effort, there was a fairly obvious lack of support. There’s no shank to aid stability, the Lunarlon midsole is fairly flat, and while the cushioning feels nice at first I did notice the hard impacts as the games wore on. 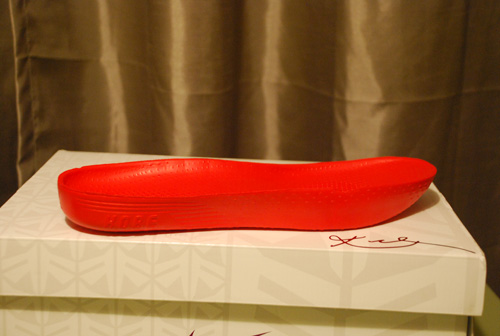 You do play very low to the ground and I didn’t have any rollover concerns – key in a low cut shoe. Court feel, like it is with most Kobes, is very good.

Responsiveness was average, and I think Lunarlon is behind Micro G and Zoom cushioning systems. It’s not bad and shouldn’t hold you back at all, but it’s nothing exceptional.

Court grip was nothing short of amazing. The traction pattern mimics the foot shape and looks a little like a topographical map in terms of design. But I found immediate stops and starts, change of direction, the reassuring squeak – the IX is great in all categories. The outsole is extremely flexible and the rubber compound is fairly soft so I’d be a little worried about longevity – though it’s not a major concern.

I don’t have too many major concerns besides the outsole, which is so flexible to the touch that it threw me off initially. You can push hard with one of your fingers on the outsole and see it flex on that point. I just don’t know how well it holds up under heavy wear, but I haven’t experienced any issues so far.

The upper is reinforced along the vamp, providing extra durability in key areas as well. If you’re concerned about looks, these do scuff incredibly easy – partially due to the colorway – but any game activity is likely going to result in serious scuffing of the toebox.

Overall, I loved the way the Kobe IX felt on foot in terms of fit. It was a 1:1 type fit throughout the upper, nearly as good as the Kobe VI – one of the hallmarks in terms of fit and the best fitting low top I’ve ever owned. The traction was also on point, but the flimsy midsole and outsole presented some problems for me in terms of support. For a guard or wing really wanting a low top, this needs to be one you try on. While the lack of support turned me off, the rest of the shoe performs well and I believe it’s one of the better low tops I’ve tested in the last year and a half. 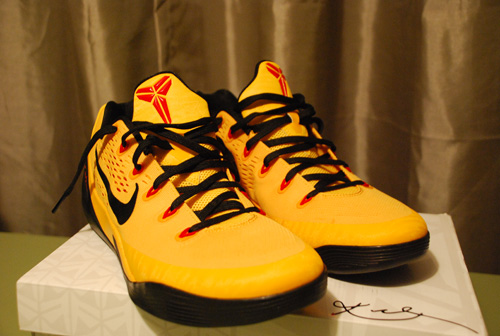 Compared to some of the recent shoes I’ve tested, I’d personally place it behind the Rose 4.5 and CP3.VII but ahead of the Venomenon, as the Rose 4.5 provides a low-to-the-ground, super snug fit but also gives you better support and similar traction performance. The IX fits better and is softer cushioning-wise than the Venomenon, and is simply a more plush shoe overall.