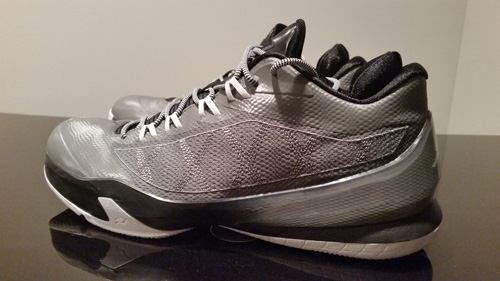 I’ve reviewed the last two shoes in Chris Paul’s Jordan Brand signature line and generally found them to be good but not great overall. Being a point guard myself, I’m always excited to try out the shoe built for one of the game’s premier PGs, but something seems to be lacking in each model.

The stiff Fuse upper of the VI compromised the fit for me and I wasn’t able to get full lockdown – unsettling in a lowtop. The VII had fantastic cushioning with the Zoom-based Podulon system and the materials were rugged, but again the shoe didn’t fit me properly. I had a hard time with the VII especially, because there were a lot of aspects I really, really liked about it and to this day I wear them all the time off-court. In both cases though, I thought that the material choice and build of the upper really hampered the overall fit of the shoes.

The CP3.VIII sees the introduction of a full length TPU frame and targeted Lunar/Zoom cushioning combo. Once again the shoe sounds great on paper, and this time delivers as a very good all around performer.

Fit
The toebox is fairly tight, and I went with an 11.5 – even with a narrow foot I would not recommend going down a half size at all. I found the lockdown to be excellent for a couple of different reasons. First, the shoe used mesh/woven panels on both the medial and lateral portions of the upper – very similar to Engineered Mesh. Whereas the Fuse and other synthetics of the last two models kept me from getting a truly snug fit, the slight change in materials really helps the shoe fit more naturally on the foot. 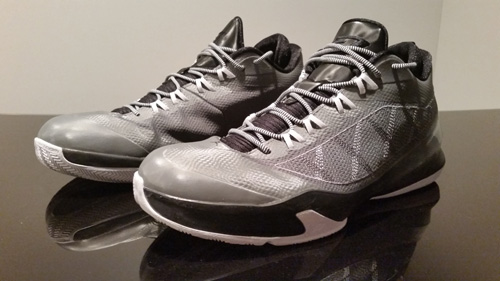 You’ll still get Fuse in the toebox and vamp areas, bringing with it stiffness and great durability. I didn’t find any hotspots or weird creasing with this combination upper. The other aspect contributing to the great fit is the full length TPU frame. Acting as the external heel counter and then sculpted all the way down the shoe, it provides heel lockdown and lateral stability for the quickest cuts. I wondered about the rigidity of it going in, but after a few wearings it began to feel more natural and three weeks in it simply feels great to be locked in.

My only gripe is with the dynamic lacing system, as the laces run through little lace straps embedded in the upper. These straps don’t hold the laces when you try to lace them tightly from the toe up, so it’s difficult to get them laced as tightly as I want.

Heel-Toe Transition
With a fairly firm midsole, the TPU frame, and a harder, less flexible rubber outsole, the transition isn’t really the shoe’s strongest point. I found it to be a little slappy through the first four or five wearings – I noticed distinct heel and toe strikes – but it admittedly became more natural as I broke them in. It’s designed to be a more firm, responsive midsole and is also pretty supportive, so the transition gets sacrificed some here.

Cushioning
As mentioned before, the stability is excellent in part due to that full TPU frame. But the shoe also plays very firm and low to the ground, making the shoe ideal for quick changes of direction. It’s not plush comfort by any means, but the Lunar foam directly under the heel is a nice addition and you get a large Zoom bag in the forefoot. Court feel is simply ideal.

Responsiveness is good if not great. The Zoom bag is large and seems to be thick and bouncy (not all Zoom setups are created equal) but the extra firm midsole and slightly clunky linear transition saps some of the responsiveness here. It’s still good, and plays low enough and stable enough that you probably won’t notice too many issues in the responsiveness department.

Traction
I had an issue with traction initially because I felt like the wavy pods picked up way too much dust for my liking, and I was constantly swiping through the first couple of wearings. The outsole is also a pretty firm rubber compound, and those typically take longer to break in as well. But after a few intense sessions, the rubber broke in a little and I barely noticed any slippage. There are portions of the outsole that hold too much dust because there’s too much of a flat surface and not enough grooves, so a dusty court may give you some trouble – but that’s the case with most shoes anyway.

Materials/Durability
The CP3 line is typically built with tough, durable materials and the VIII follows that trend. It’s kind of a no frills type of shoe, and there aren’t a lot of areas I can see excessive wear building up. The outsole is pretty tough, though probably not setup for outdoor play, and the toebox features plenty of Fuse overlays. The woven portion is a tight weave and the build in general is very good. The only issue that could crop up would be with the lace loops (I had ones like these break on my XX9s) but so far, so good there.

The CP3.VIII is without question my favorite Chris Paul signature of the last three years and it’s just a really good all-around lowtop. The fit is fantastic and the shoe plays low to the ground with good responsiveness; it nails the big areas needed for a good lowtop. A slightly different traction layout would be nice and it’s not as smooth from heel-toe as the other shoes I’d been playing in (it does improve considerably once broken in though). Surprisingly, it’s a sleeper favorite of mine and I’ll keep them around for when I feel like hooping in a pair of lows.