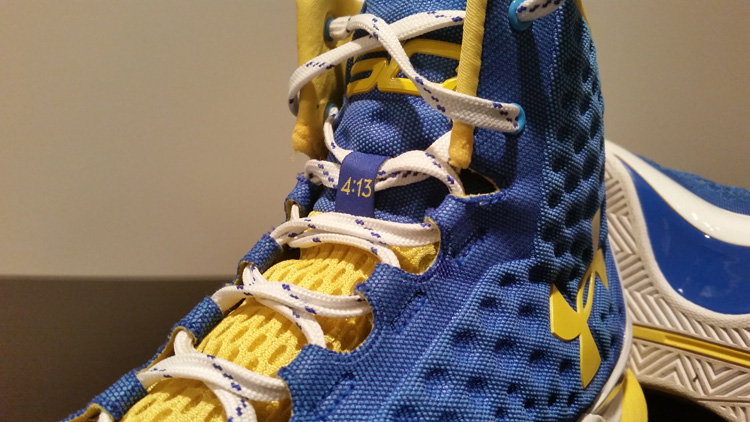 Performance Review: Under Armour Curry One 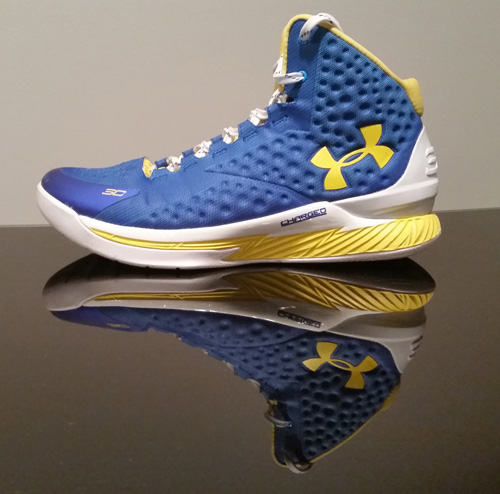 No disrespect to Brandon Jennings and the Bloodline Under Armour models of years past, but the Curry One was likely the most anticipated and most marketed UA hoops shoe since the company broke into the basketball shoe market. Curry is the hottest name and best player on the NBA’s best team, and populates Sportscenter almost daily with an array of pull up threes, slick ballhandling and Steve Nash-ian court vision. In other words, it was time for Under Armour to capitalize.

Behind a slick “Charged by Belief” marketing campaign, the Curry One was rolled out in mid-February. I was pretty stoked to my hands on a pair and I copped mine the weekend they released. I was expecting a solid, if unspectacular performer, cushioned with “Charged” full-length Micro G foam. The AnaFoam upper was also something new on a UA shoe, so with a pretty high degree of excitement I laced them up in all three of my leagues the first week.

Now a month later, I continue to be blown away.

Fit
I mentioned the AnaFoam upper already, and it’s been fantastic from a lockdown and comfort standpoint. AnaFoam is built of (obviously) a foam layer but also a stretchy textile that gives it some flexibility and malleability which separates the material from stiffer Fuse uppers that you’d compare it to. I found it to be a very adaptive fit that molds quickly around the foot. There are also perforations throughout the shoe, reducing weight and adding breathability (although I never notice breathability when I’m playing, some may feel differently). 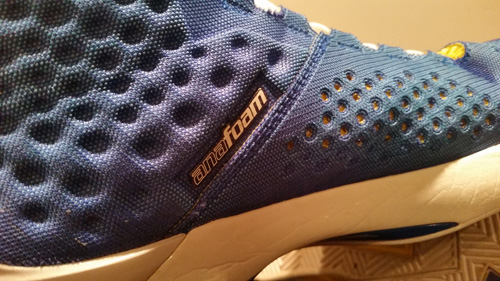 Combined with seven lace loops, the fit is vise-like. I loved the way it laced up – no frills and serious lockdown. I had no movement or slippage anywhere inside the shoe, no matter how hard I changed direction or how quickly I’d stop and pop a jumper. The external heel counter is larger and more rigid than the Clutchfit – a definite improvement for me. 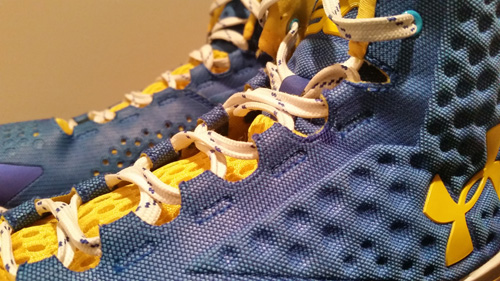 Fit is the most important aspect of a shoe to me and the Curry One was perfect for all intents and purposes. Supportive, yet flexible and super light (one of the biggest initial impressions of the shoe is how light it plays on-court), UA has something very good going with AnaFoam. 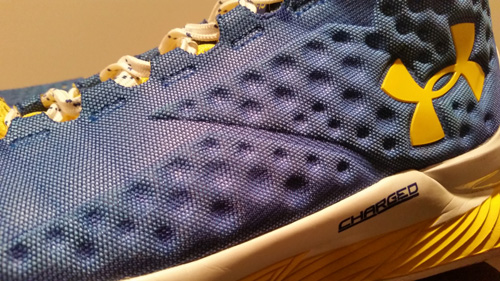 Heel-Toe Transition
Borrowing the outsole tooling from the Clutchfit Drive combined with a Charged Micro G midsole, the transition is buttery smooth. There’s a plastic TPU shank also, not beefy by any means, that adds some support but the shoe flows extremely well from heel to toe. 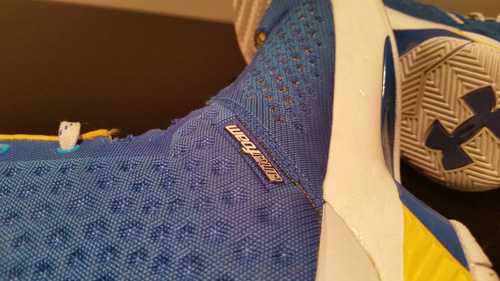 Cushioning
If you’ve read any other reviews on here, you can probably figure out that I love Micro G. It’s the best foam cushioning on the market, period. adidas hasn’t quite dialed Boost in all the way and Lunar foam, in a basketball shoe, is laughably inferior in my opinion. Firm, responsive, consistent and low to the ground, Micro G is everything a foam cushioning platform should be.

In the Curry One, the Micro G is “Charged,” which basically amounts to UA adding a layer of the Charged foam on top of the Micro G unit. Charged foam is supposed to feel softer under less force (i.e. standing around during a free throw) and then firm up and be super responsive under higher forces. I will say that it does perform as it’s intended to, and while it’s not a drastic difference from pure Micro G, it is better from a firm, responsive standpoint. 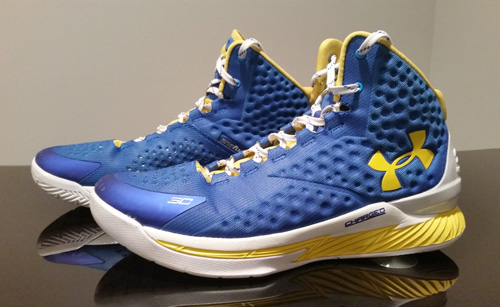 I already talked about the fantastic transition, but court feel and responsiveness also rate very highly for me. I think it’s better cushioned than the HyperRev 2015, Rose 5 and Clutchfit – and those shoes were all pretty darn good for me too.

Traction
Full herringbone and the same setup as the Clutchfit Drive. It’s a very good pattern, but the rubber is pretty soft and I’ve found it to be a little slick on less than perfect floors. As long as you keep swiping you won’t have any issues, and on clean floors it’s squeaky good. But most of us probably don’t play on the most pristine court surfaces so it is something to keep in mind. It’s nothing to deter you from buying the shoe, though. 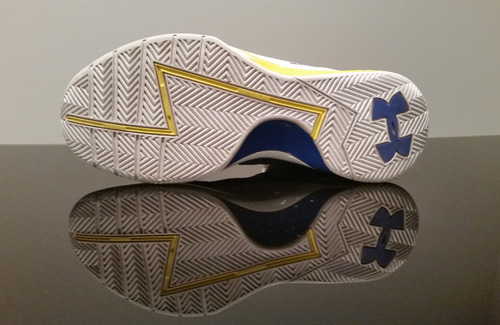 Materials/Durability
Early on you could ding UA for some shoddy craftsmanship, but that’s no longer an issue in my opinion. The last 5 pairs of UAs I’ve had (Spawn 1, Charge Volt Low, Spawn 2, Clutchfit, and now the Curry One) have held up extremely well for me and for the buddies I’ve passed them on to when I’m through with the review. All pairs have taken a beating and responded well. 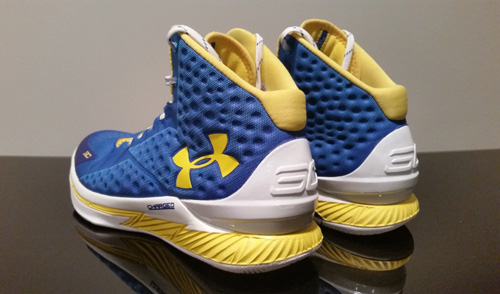 I’m seeing some scuffing and wear on the toecap of the Curry One, but that’s to be expected with any shoe. Other than that, the construction is pretty well done throughout and so far I’ve not had any issues whatsoever. UA did manage to throw in that shiny, plastic-y finish on parts of the midsole that I don’t like aesthetically but it’s nothing to criticize from a performance standpoint.

There are also a lot of cool details throughout the shoe and packaging that add to the story and experience with the shoe. You’ll see “4:13” stitched on the tongue in reference to Curry’s favorite Bible verse, Philippians 4:13, and “I can do all things…” shows up on the inside of the tongue. Personally, it’s great to see a brand embrace a player’s faith in that manner. Props to UA and Steph for that one.

Inside the box, you’ll find an extra set of laces (I swapped these in immediately) and a card thanking you for purchasing the shoes. The extra attention to detail is something I really enjoyed about the shoe.

I typically receive questions about the Curry One at least once a night in the various leagues I’ve played in, and my standard response is this: it is pound for pound the best shoe out there right now. It’s not fancy, not tech’d out, but it’s super light, the fit is incredibly good and cushioning is pretty perfect in all categories. Again, I’m a guard and this is a guard’s shoe, but I think most players would enjoy the shoe regardless of position. At $120 retail, it’s pretty affordable too. 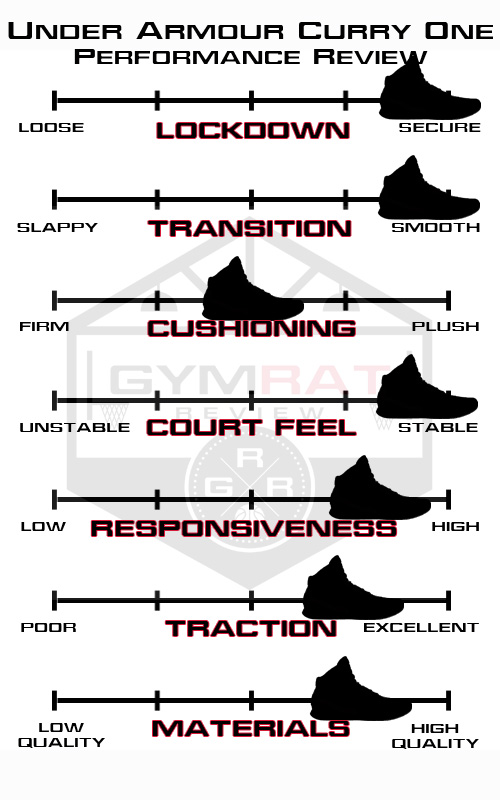 16 thoughts on “Performance Review: Under Armour Curry One”