I picked up the Rose 4.5 a few weeks ago, due to the fact the performance shoe releases had either slowed down a bit or were increasingly difficult to cop (seriously, why do they have to make the Kobe 9 Elite so limited? It’s a performance basketball shoe that some of us, ya know, would like to wear on the court and I’m not paying some BS reseller price either).

I had previously struggled a bit with Rose’s signature shoe line, as both the 2 and 3 were not favorites of mine. The cushioning, to me, was non-existent and non-responsive in those shoes. (It should be noted that his first pseudo-signature shoe, the TS Supernatural Creator, is an all-time great performer and one that I scour eBay for on a weekly basis.) I passed on the 4 since I had other shoes I was reviewing at the time, although the “Quick”-inspired midsole intrigued me. I finally came around on the 4.5 and have given it several runs over the past few weeks. I was pleasantly surprised to find the Rose 4.5 is one of the best guard shoes I’ve tested.

Like many adidas models that employ a Sprintframe heel counter, the Rose 4.5 runs pretty narrow – especially in the heel. You can see how narrow it’s built looking straight on at the back of the shoe, so if you have a wider foot you might struggle to get in these. Personally, the narrow heel was great and the fit at the heel was completely secure.

Through the midfoot and toebox you have a mixture of synthetic leather and mesh, known as Sprintweb, with the wavy pattern laid out in a way that promotes flexibility. I found the upper to be a little stiff, a little plastic-y at first, especially in the toes where you have a thicker toebox with some structure for protection. Still, you’re able to get a very snug, yet comfortable fit after a game or two when tightly laced and the upper breaks in nicely. If you’re an adidas fan and have played in some other models this year, it’s not 1:1 or glove-like as the Crazyquick, but it locks down way better than the CrazyLight III.

It should also be noted that the asymmetrical collar and Geofit interior padding are both very nice, providing range of motion and interior comfort and structure.

As mentioned before, the midsole is segmented similar to the Crazyquick but only on the medial side. The lateral, or outer edge looks basically like a traditional midsole, and the heel-toe transition is excellent. The outsole is set up similar to the Crazyquick as well, with prominent flex grooves and zones. Overall, you’ll get a smooth transition from heel strike to toe off and shouldn’t have any issues whatsoever in that area. 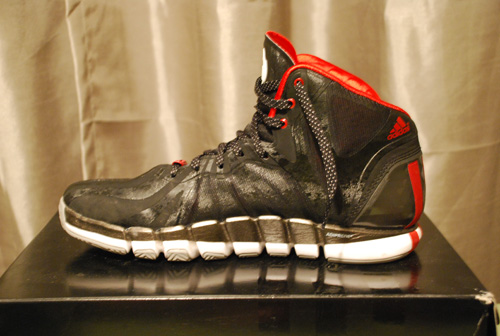 As is the theme with a lot of current adidas models, the cushioning is very low-profile and fairly firm. It’s an EVA midsole with an adiprene insert under the heel (you’ll see it looks like Crazyquick under the insole.) The flexibility aids the responsiveness of the shoe, and I felt like I was able to plant and change direction quickly.

The court feel and stability are also excellent, and there’s a surprising amount of midfoot support built into a low-profile cushioning setup. As someone that had experienced some soreness after playing in the Venomenon and HyperRev, the support in the Rose 4.5 was a blessing. You don’t always get that in a basketball shoe but when you do (like in this shoe and the UA Anatomix Spawn) it makes a noticeable difference. 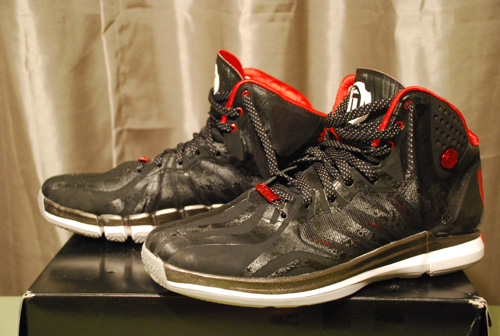 Traction was pure herringbone laid out into various zones on the outsole. The grooves were deep and traction was good from the start on just about any floor. It provided great stopping and cutting ability, and was simply very good overall.

I anticipate the Rose 4.5 holding up very well. The synthetics are high-quality and feel pretty sturdy on foot, even if they are a little stiff. The midsole foam is a proven compound and adiprene is typically long-lasting when it comes to impact protection. The herringbone grooves are thick and fairly deep, while the outsole as a whole is a firm and durable compound. It’s a rock-solid shoe overall. 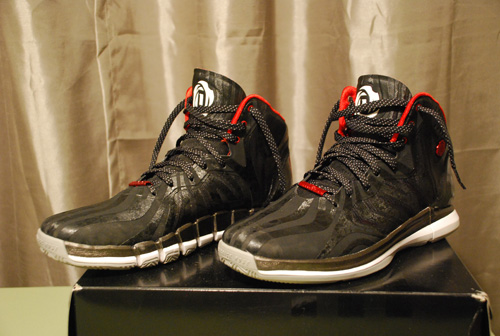 Rock-solid is probably the best way to describe the Rose 4.5 overall. Want a snug , structured fit? This shoe has it. How about a low-to-the ground midsole, great traction, and midfoot support? Look no further. This is just an all-around excellent guard shoe, and a solid one for anyone desiring a low-profile ride with considerable support and flexibility.

The Rose 4.5 is one of my favorite shoes I’ve tested so far and one that I anticipate hooping in for a long time.