Back when I reviewed the Jordan CP3.VI, I lamented that most of the shoes in Chris Paul’s signature line were pretty good on court, just not great in any one aspect. Something always held the shoes back from being elite performance models – in the case of the CP3.VI it was its inability to provide sufficient lockdown from heel to toe. Unfortunately, even though I really like a lot of aspects of the shoe, the CP3.VII falls victim to a similar problem.

I struggled worse with this review than any other because there was so much that was great about the shoe, but it didn’t exactly work for me. Even though it personally didn’t suit my playing needs I will wholeheartedly recommend the CP3.VII as a performance model.

For me, the fit of the shoe is weighed more heavily than any other aspects and that’s the reason I didn’t really enjoy playing in the shoe as much as I have others this year (including the Crazyquick and Anatomix Spawn). Again, I will stress that this is a personal opinion, but the last (shape of the outsole) just didn’t fit my foot right and I wasn’t able to get the type of lockdown I look for. To me, lockdown = confidence when I’m playing. If a shoe fits me right, I won’t even notice that it’s there and I have complete confidence making cuts, changing direction or stopping on a dime.

In the CP3.VII, I always felt that my foot wasn’t fully secure. My toes were kind of cramped in the toebox (laterally, that is), I felt a bit of an unnatural flex in the toebox as well, and the Achilles notch continued to hamper the heel fit. While the lacing system and Dynamic Flywire integration was adequate, I never felt fully locked in through the midfoot either. This was all probably due to the shape of my foot and for you, the fit may be just fine; it just didn’t suit me.

Other than that, I felt like the shoe was built slightly wider than some others I’d tested (I have a pretty narrow foot) so it might fit a broader variety of players. The upper was comfortable and inner bootie was extremely plush – one of the best interiors I’ve tested. While I probably won’t add the CP3.VII into my hooping rotation, it’s definitely sticking around as an off the court go-to shoe.

Transition was smooth from heel to toe, aided by a multilevel outsole and large midfoot shank. The implementation of Podulite in the midsole gave the shoe a nice, natural ride through the footstrike. No complaints in this department.

The CP3 line has long used a Podulon cushioning setup, which is basically a dual density cushioning system that places responsive foam pillars at strategic points throughout the footstrike. It’s a responsive and bouncy cushioning platform that’s relatively stable, although you won’t feel quite as low to the ground as a Lunarlon or Zoom Air systems. The CP3.VII debuted Podulite, which uses a forefoot Zoom Air unit under the ball of the foot which added even more responsiveness. 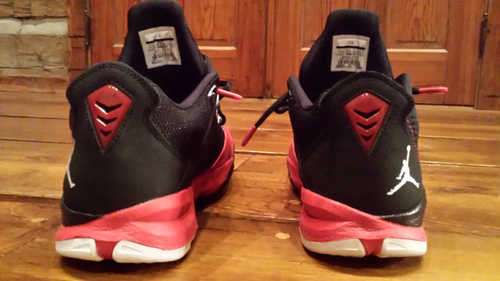 Bottom line, this shoe is ridiculously comfortable. The Podulite is bouncy and plush, and simply feels great on court. A Phylon midsole houses the aforementioned external TPU shank provides plenty of midfoot support. I didn’t give it a 10/10 simply because I personally like a little more court feel, but this cushioning platform is excellent.

Traction is also top notch, as it was on last year’s CP3.VI. Deep herringbone is used throughout and you’ll get that reassuring squeak on quick stops. It is a multilevel outsole with raised portions along the lateral side of the outsole that do an excellent job providing traction laterally.

In the black/red colorway I tested out, synthetics were used throughout the upper. The midfoot portion reminds me a lot of the makeup of the Air Jordan 2010 Outdoor – which was quietly one of the better shoes I’ve ever played in. It’s a relatively tough and durable upper, and should hold up well. TecTuff is used on the toe wrap on the medial side, as CP3 tends to drag his toe when he changes direction – it’s an intelligent addition to the shoe and beefs up the durability on that end. All in all, the CP3.VII feels and plays like one of the more well-made shoes I’ve tested this year. 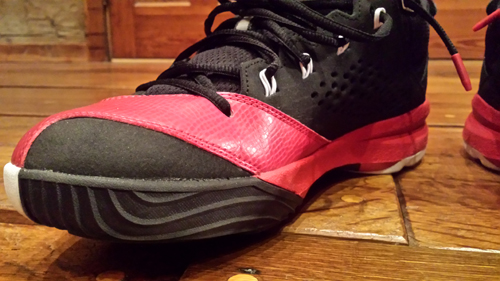 Once again, I want to reiterate that I think the CP3.VII is a great performance shoe and it’s certainly one of the most comfortable I’ve played in in a long time. It featured the best balance of court feel and impact protection that I’ve tested in a long time – I loved the cushioning.

It doesn’t suit me on-court because I value fit so much and I simply couldn’t get the right lockdown out of the shoe – but I still recommend it to most players. Definitely try it on in store before you buy if you go the online route, but for a guard/swingman type that likes the feel of a lowtop I think the CP3.VII is one of the best options out there.