What up my people it has been quite some time since I acquired some new basketball kicks and after two league tournaments and countless pick up games, I thought it was time to retire my Nike Hyperdisruptors. Although they weren’t my favorite hoop shoe, I had grown fond of them during our time together and there were some attributes that I really liked about them; I was actually sad to see them go.

On that same token, I was excited about the opportunity to shop for some new kicks. After a couple days of research I had a plan of action to get the Hyperdunk 2013 (which was later reviewed by the main man Jake) so I went done to Finish Line to get the job done. As I was requesting said shoe from the sales associate, another shoe that I had not noticed previously caught my eye – the Nike Zoom Hyperquickness. 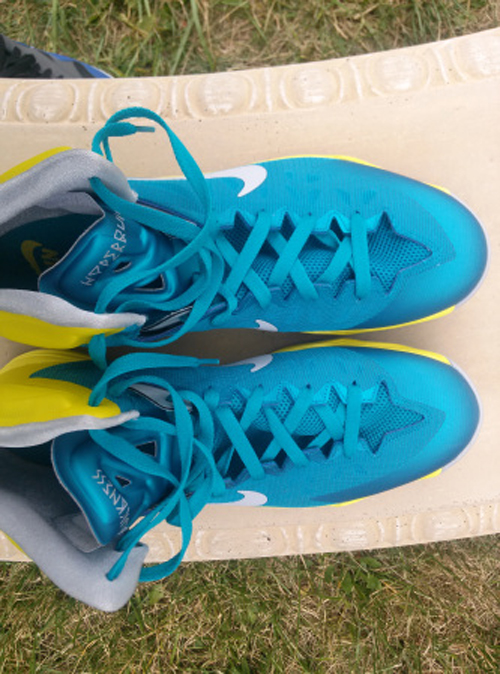 I was intrigued by the shoe’s silhouette and even though it shares some similarities to the Hyperdisruptor, I felt it warranted further investigation. After regaining the sale associates attention I requested that the Hyperquickness also be brought to the bench.

I decided to try on the Hyperdunk first and I had heard mixed reviews from my colleagues and peers about the shoe. Of course being the opinionated man that I am, I wanted to form my own opinion. When I tried the shoe on I had mixed feelings. I mean, it was ok but the midsole was a bit too thin and I didn’t feel like it gave me the support I needed (I liked it but didn’t love it.)

I tried on the Hyperquickness next and I can say that I was overall happy with my initial wear. And after looking at the price of both – the Hyperquickness clocks in at $105 while the Hyperdunk 2013 will run you $140 – I went with the the pair that was the best bang for the buck, the Hyperquickness. Value definitely plays a role when it comes to this shoe.

Fit: 8
As previously stated, I had been playing in the Nike Hyperdisruptor before and although I gave it a mixed review on some aspects, in terms of overall fit I gave high marks. This is also true with the Hyperquickness. The shoe runs a tad narrow, which I have become accustomed to, and the toe box is pretty small. While this was a problem with the Hyperdisruptor, I find it to be to be much better in the Hyperquickness because of a difference in materials (which I will cover later in the review). The shoe has an inner bootie, which makes the fit more comfortable and also keeps the tongue in place.

The also shoe comes with a with an interesting lacing system. Near the ankle you have two pieces extending up from the midsole, made of a tough yet flexible material that forms around the base of the ankle (think the LeBron 9.) It’s an often overlooked feature but enhances the lockdown and the fusion between foot and midsole because of the feature and the overall shape of the shoe.

I gave the shoe an 8 in terms of fit. I would have given it a 8.5 or even a 9 if not for the lack of padding the upper beside some portions around the ankle where it is needed most. The Hyperfuse material with which the upper is made also doesn’t fully conform to the foot for a glove-like fit.

The transition was pretty smooth and this was largely due to the shape of the midsole and sole, which kind of reminds me of the Kobe 8. It works in tandem with the heel and forefoot Zoom Air cushioning and allows a for smooth gait very similar to the Huarache 2k4. It’s nothing flashy, simply very middle of the road, but I liked the transition a lot.

Here at TGRR we all have different preferences in terms of cushioning. I, for instance, am a big forefoot Zoom, heel Air guy. It’s a system which is available in the KD V and VI, both of which are amazing in terms of cushioning if you ask me. Though the Hyperquickness has a Zoom/Zoom system, I still feel that it is more than sufficient (especially in a $105 shoe).

It should be noted that the Hyperdisruptor shares the same system but failed to give me the support and cushion that I desired. How could this be you ask? This is due to one fatal design flaw in the midsole. The Hyperdisruptor’s midsole was very soft and flexible – which was very comfortable – but it had very little stability and felt as if you were walking on the ground at some points and kind of diminished the responsiveness of the Zoom bags.

I brought this to my comrades here at TGRR and they agreed that this could have been rather easily and simply remedied with the inclusion of a carbon fiber plate (or any type of rigid TPU shank).  It would have given the shoe structure and stability while not adding much weight to the design. (We’re guessing it wasn’t included because a carbon fiber plate would have added cost to an already 135 dollar shoe.) In the Hyperquickness, however, they seemed to have fixed or at least improved upon this lackof structural integrity.The good people at Nike used stiffer and more dense foam in the midsole which not only gave the shoe more structure but enhanced the feel of the Zoom bags. Although it wasn’t a plate like we wanted, the new foam compound was a major improvement.

The traction for the Hyperquickness in identical to the Hyperdisuptor. Deep herringbone patterns in the forefoot and heel where you need it most – it just works people. No need to get all in-depth.

I used to think that Hyperfuse was Hyperfuse but Nike kind of hit us with a curve ball, probably in an effort to cut costs. They have chosen to ditch the normal, layered synthetic Hyperfuse materials and go for a cloth or soft mesh interior with a reinforced Hyperfuse casing for most of the upper. 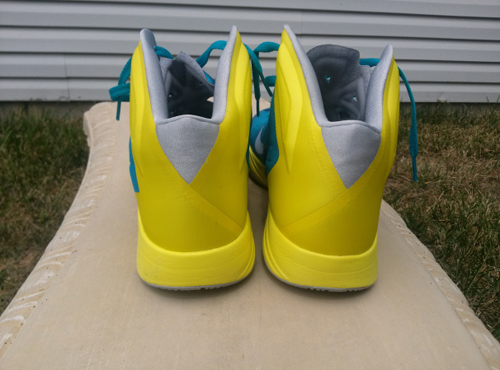 They did, however, use the full Hyperfuse coating on the heel counter and around the toe box for added durability – a slick way to only give you what you need where you need it. I have been playing in these kicks for about a month and I have been impressed with the overall durability. When I had the Hyperdisruptors I had several incidents with separation in the sole and midsole which forced me to return them to the store a few times to exchange them. I have had no such problem with this model and even though I have put some miles on these I feel they have plenty of life in them. You’re not getting premium materials, but it’s still solid.

Like I have stated there are a lot of things to like in this model. Nothing really stands out to make it amazing, but nothing that I can really say bad about it. It’s just a really solid shoe. It’s useful for players of multiple positions because of its structure and build, and with a price point at only $105, I feel that it is steal for a shoe of this caliber.

View all posts by jerredfinch