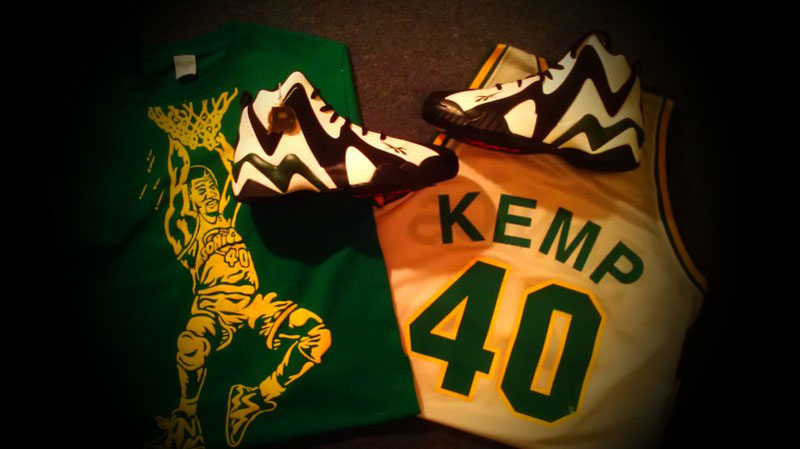 In my last post I talked about the re-emergence of big man shoes in today’s sneaker market and I’m going to continue with the same theme in my latest pick up. I present to you the Reebok Kamikaze II OG Sonics, which I think is even cooler because of the possibility of the Supersonics coming back to the NBA. I was able to pick up the shoe from the good folks at City Gear for around $109.00 tax and shipping included in an early morning release day pick up. The Kamikaze II is the latest in a line of nice retro releases from Reebok Classics which include Emmitt Smith’s ES22, Allen Iverson’s The Question and Answer IV’s and Dominique Wilkins’ colorway of the Twilight Pumps. I have been more than excited about all these releases and am proud to say that I was able to pick up almost all of these retro’s for a modest price and great quality (ed. note: Sittler is pumped for the DMX 10 and Answer I releases too).  With that said, the Kamikaze is by far one of my favorite retro pick-ups to date.

The Kamikaze II was made famous by Shawn Kemp, one of the most athletically gifted players of the 1990’s not named Michael Jeffery Jordan. He was dubbed “The Reignman” because his ability to dunk on any and everybody. You will not find a top 10 dunkers list without Kemp’s name on it. The man had the rare ability jump so gracefully, but also throw it down with ridiculous power and what Shaq called “Funk” – creativity/swagger. If you were to use a player comparison of someone in today’s NBA, he was like a combination of Josh Smith and Blake Griffin, but with a flat top.

Kemp played for the Seattle Supersonics from 1990-1997. In those years he teamed up with Gary “The Glove” Payton (who is also rumored to have his Nike shoe re-released later in the year) to form one of the most dominant guard/forward tandems of the 90s outside of MJ and Pippen. Besides having catchy nicknames, Kemp and Payton ran roughshod over the Western Conference over their tenure in Seattle. Those seven seasons included five straight 50+ win seasons and two NBA Finals appearances (where they lost to the Bulls as did everyone did in the 90s.) Be that as it may, Kemp put up some highlights that will remain in NBA history forever and some pretty dope shoes as well.

The Kamikaze II “Sonics” is a mid top shoe with a white and black, leather and nubuck upper. Its most distinguishing feature is the black, almost lightning bolt, nubuck design that engulfs nearly the entire upper. This shoe also has accents of green on the midsole as well as green Reebok Vector logos throughout the shoe, which really pop against the black and white canvas. The sole is black with a classic herringbone design, the most functional setup from a performance standpoint in my eyes. There is also a green wave at the forefoot flex point and a chili red Reebok logo. In the sole itself Reebok uses Hexalite, which is comparable to Nike Zoom or Air Max. Hexalite works by using many hexagonal pods placed closely together, making a shape similar to a honeycomb. When weight is applied to the grouping of hexagons, they bend and mold around the foot while acting like a spring as it deflects and spreads the weight of the foot, helping on-court performance. The Kamikaze II was one of the first shoes to use this technology but it’s still being used on many new and retro silhouettes, including the Kamikaze I (which is also rumored to be released in the near future) and many shoes from the Iverson line. From a breathability standpoint – like most shoes from this era – they offer little relief so I suggest you let them air out after wearing them on the court or as a fashion statement.

Since the KII’s retro debut it has been worn on court by one of my favorite young players, Sacramento Kings’ point guard Isaiah Thomas (cool because he’s from Seattle, and ironic because the team could be moving back there soon.) Los Angeles Clippers’ shooting guard Willie Green has brought them out as well. They were also worn off the court by Rick Ross, Swizz Beatz and Jay-Z.

Since the success of the OG colorway, Reebok has followed up the release with rumors of a red and black colorway and a black and white on February 1. If you couldn’t get your hands on the OG colorway, make sure you get your funds ready by the first; I believe that it will be worth it. This shoe has a very nice combination of style and functionality that will appeal to today’s modern baller. You can’t go wrong with the price either! 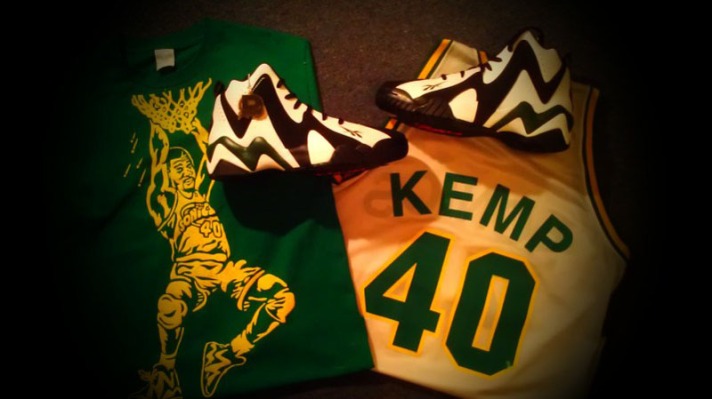 View all posts by jerredfinch

One thought on “TGRR Blog: The Return of the Reignman”